National Indigenous Peoples Day is an opportunity for all of us living in Canada to learn about Indigenous histories, cultures and traditions.

In the country we now call Canada, there are three categories of Indigenous peoples who were the original inhabitants of this land; Inuit, Métis and First Nations.

In BC, the Indigenous community is predominantly First Nations peoples. There are 198 distinct First Nations in BC, each with their own unique traditions and history. In Vancouver, we are situated on the traditional territories of three of those First Nation communities, xʷməθkʷəy̓əm (Musqueam), Sḵwx̱wú7mesh (Squamish), and səlilwətaɬ (Tsleil-Waututh) Nations.

During National Indigenous History Month we normally focus on the Indigenous arts and culture that are woven into the fabric of Granville Island. Artists such as Xwalacktun O.B.C. (born Rick Harry), an internationally recognized Skwxwú7mesh Squamish Nation artist, who carved the two house posts at Ocean Art Works. Haida artist and Master Carver, Clarence Mills, from Haida Gwaii, who is currently on Granville Island restoring totem poles and creating new works; Textile Artist, Debra Sparrow, whose weaving patterns were turned in giant murals on the Granville Street Bridge posts; D’Arcy Basil, who is carving a 2,500 lb Jade monument to honour the children that perished at the Kamloops Indian Residential School, and many more whose work is shown around Granville Island.

This year our focus is on musicians, an opportunity given to us by The Talking Stick Festival, now in its 21st year, and the TD Vancouver International Jazz Festival Coastal Jazz, now in its 36th year.

A Syilx singer/songwriter from Vancouver with echoes of early-2000s indie-rock. The singer/songwriter features songs in N̓syilxčn̓, an endangered language spoken fluently by roughly 50 people. His journey in learning the language—and working to preserve and promote this vital heritage—began with his album Snəqsilxw (family), and is redoubled with each affecting live performance.

Cheyanna Kootenhayoo AKA Kookum is a DJ and multimedia maker from the Alexis Nakota Sioux Nation, and Cold Lake First Nations, their maternal Denesuline traditional territory. Kookum is an open format DJ inspired by EDM and Hip Hop music. This diverse- mix-diva is a force on the decks and always keeps the party hype fresh and unpredictable. Kookum tours nationally and internationally with the Snotty Nose Rez Kids. DJ Kookum will be at Ocean Art Works on July 2nd. 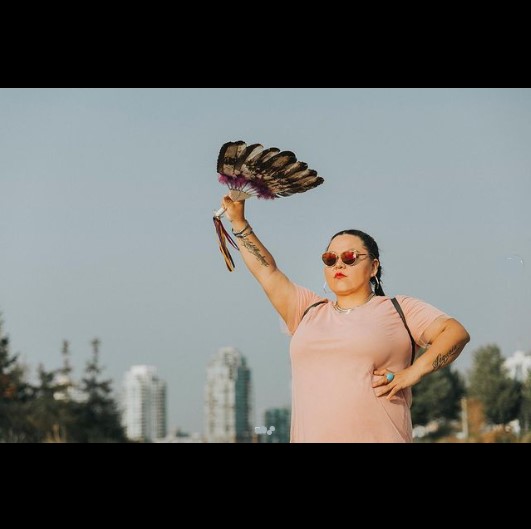