I love cooking outside on my patio during the summer. I do fine with steaks and chops and sausages, so I tend to stick to those. Can you give me some grilling tips and also some ideas about what else I can cook on my outdoor grill? 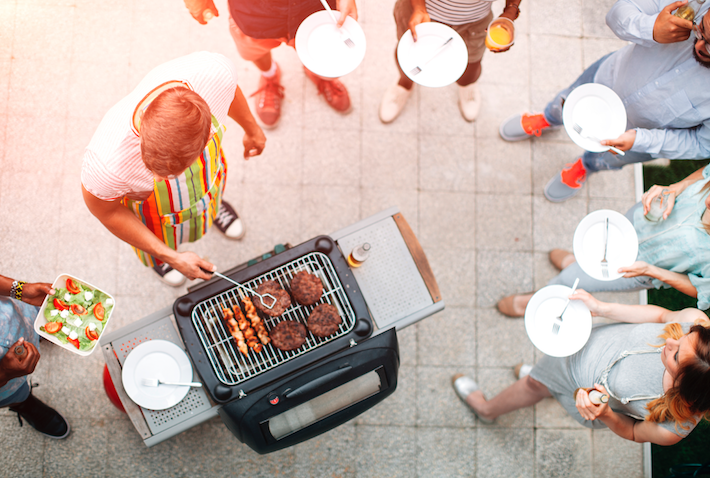 Ah, yes, now that the days are longer and warmer, nothing quite says “the good life” better than the smell of grilled foods wafting through the neighbourhood. There’s something primal and satisfying about cooking over glowing ambers (if you’re using a charcoal grill) or open flame (if you’re cooking with gas). It’s direct, simple, yet versatile.

In this discussion, I’ll skirt the great debate on “Which is better - charcoal or gas?” and simply say that, for day-to-day, I personally opt for the turn-the-knob adjustable convenience of a gas grill.

Now, a few things to mind for overall grilling success:

Preheat the grill and control the heat - for gas grills with multiple burners, I always set up two to three temperature zones by turning the burners to different settings: highest for skirt steak or shrimps and scallops; medium high for steaks, chops, burgers, fish, and vegetables; and medium for foods that take longer to cook through like bone-in poultry and sausages. A low heat area, if you can spare the room, is good for keeping food and even sauces warm. You can achieve the same effect by arranging the coals accordingly in a charcoal grill - thicker pile for more heat and thin layer for less.

Always clean your grill before and after you preheat the grill and between each bout of cooking with a wire brush, finishing with a quick wipe with a damp rag. It’s just good house-keeping.

To prevent food from sticking, oil your grill lightly just before cooking. An easy way to do this is to grab a folded sheet of paper towel with tongs, dip it in some oil, then rub it on the grill. In addition – and I believe more effectively – lightly oil your foods before putting them on the grill. And most importantly, once they are on, exercise a little patience. Most foods, if they stick at the beginning, will become unstuck after a few minutes when their natural oils and moisture are released. So don’t be tempted to flip food too early. Test by nudging the food sideways gently. If it shifts easily, it’s ready to be moved or flipped.

To dampen flare-ups, keep a spray bottle of water handy.

Use a disposable foil container for covering food that needs to be cooked through at lower heat, instead of closing the lid to the whole grill. It may also be used to block off the wind on a gusty day.

Invest in a wire barbeque cage or two. They are great for keeping fish fillets unstuck, and they make containing and turning smaller pieces of foods like peeled shrimp, cut veggies, and scallops much easier.

To stay foodsafe and be more precise about doneness, use a meat thermometer.

When it comes to what to put on the grill, the sky’s the limit. Okay, maybe I wouldn’t try to barbeque a Mars bar, but everything else is fair game. Here are some of my very favourites:

Corn on the cob – My late friend and mentor James Barber of Urban Peasant fame showed me the absolute best way to eat corn. Start by peeling back the husk and pulling off the silk underneath. Fold the husk back over the corn, spray it with some water until just damp and put it directly on the grill. Grill for about 15 minutes, turning occasionally to cook evenly. Peel back the husk, sprinkle with the juice of half a lime. Best corn ever!

Beach oysters in their shell – I’m talking about the meaty palm-sized monsters here. Make sure that the oysters are tightly closed and weighty, which are indications that they are alive and fresh. Place them cup (curved) side down on the grill and cook until they open, about 10 to 15 minutes. Meanwhile, mix some grated ginger or sliced chilies, sushi soy sauce, and a dash of sesame oil in a small steel bowl and heat on the grill. When oysters are done, discard the top shell, sprinkle with finely chopped green onions and top with some sauce to taste. Large cherrystone clams are terrific on the barbie as well. They take about 4 to 5 minutes and are great plain or with lemon butter. Be careful not to spill the juices when serving them.

Butterflied leg of lamb – This is a heart of the party that can feed a crowd. Ask the butcher to debone and butterfly the leg for you. Rub the meat with minced garlic, rosemary, and olive oil and marinate for a few hours or overnight. Brush off the solids and season well with salt and pepper and grill over medium high heat on both sides until well browned, about 5 minutes each. Lower the heat or move to cooler area of the grill and cook until desired doneness. Test with meat thermometer, which should read 135ºF for medium. Remove from heat and rest for about 10 minutes before carving into thin slices across the grain. Serve with mustard and grilled veggies.

Poultry – Chicken, squab, quail, and game hen are all best butterflied, rubbed with seasoning and oil or marinated. They are also all best marked over the hotter part of the grill then cooked with indirect heat on the cooler part of the grill until done. If you want to glaze your birds with a sauce containing sugar, or baste with barbecue sauce, do it a couple of minutes before you serve so the sugar won’t burn.

Vegetables – I love veggies on the grill. Zucchini and eggplants are our family favourites. Thinly slice these lengthwise, then season and oil them before grilling. Bell peppers of every colour in large pieces turn sweet and lovely when cooked nice and slow. Tomatoes cut crosswise and grilled over medium are delicious squished over rice. New potatoes, sliced squash, and other starchy staples are better par-cooked and easier to handle in a cage. Skewering asparagus with 2 or more skewers like a raft will make them easier to turn and prevent them from falling through the cracks.

Fruits – Peaches and nectarines, skin-on, and pineapple rings can go directly onto a clean grill and make terrific dessert with ice cream or fabulous accompaniment to prawns or pork chops. Apples and pears will retain good colour when soaked in some lemon water, then brushed with oil and grilled. They are spectacular tossed with cinnamon, nutmeg, cloves, ginger, and honey on waffles with crème fraiche.

Don’t forget that fish and crustaceans like crab, shrimp, and lobsters can also yield tasty treats from a nose-to-tail cooking approach. On a large fish such as halibut, salmon, or sablefish,...

Located inside the Public Market, Granville Island Produce is a one-stop shop for all your produce needs. We carry a vast array of produce including fresh fruits and vegetables from local farmers....

I love oysters and other shellfish like scallops, clams, and mussels....