I’m thinking about changing things up a little during this holiday season. Can you suggest some ideas other than the traditional turkey or ham that will entertain the family? 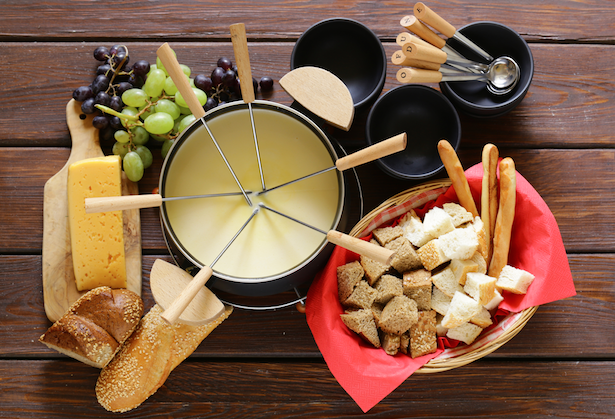 Holiday dinners remind us that the heart is directly linked to the gut. So beware when you depart from the traditional. A turkey dinner - done exactly the way mom always does it, down to the Jello salad - is far more than just about the food; it’s fond memories polished by time, idealized as legacy. Having said that, there is no reason why tradition should remain static and immutable.

One of my beef about the traditional Christmas dinner of turkey or ham with all the trimmings is the sheer amount of work getting it all to the table, not to mention the daunting cleanup job afterwards. My answer? Fondues.

My reasons? You can prepare nearly everything ahead of time for a fondue, so with a little help laying it out, you can be sipping on your eggnog till dinner instead of dashing around the kitchen getting stressed out. And cleanup is a cinch as everything would have been eaten so all that’s left to do is to load the dishwasher, or have someone else organize the dishwashing brigade. Also, fondues are participatory (everyone gets to cook), interactive (everyone gets to look out for someone else’s food and possibly comment on it), and playful (Swiss tradition decrees that if a nugget of bread is lost in the cheese by a man he buys a bottle of wine and if the same happens to a woman she kisses the man at her left). But before going further, I must confess to defining “fondue” rather loosely. The traditional cheese fondue, hot oil fondue (liberally interpreted to include one of my family favourites, the Tempura party), Chinese-style “firepot” or Japanese shabu shabu and sukiyaki, even raclette, are all fair game.

Let’s start with cheese fondue. Using the simple cheese fondue recipe, go and consult our Market Experts at Dussa's Ham and Cheese or Oyama Sausage Company for cheeses that suit your budget and you taste. But that’s not all. While you’re at the Market, pick up some side dishes to accompany the main event. Cold cuts from prosciutto to pates, a selection of olives (try marinated ones from Duso’s and Zara’s), a green salad embellished with tomatoes, avocados etc. (from Market produce vendors) and nuts (from the Grainry) dressed with flavourful drizzles from the Stock Market. Of course I’m assuming that you already have a fondue pot with burner and accompanying forks. If you don’t have one, there is still time to put it on the holiday wish list. If you already have a fondue pot, may be you’d like to shoot for a raclette machine (from Dussa’s) with which you can serve molten cheesy potato bites and more a la Swiss.

Another classic fondue is the hot oil fondue, “a la Bourguignonne”, which basically involves cooking - at my house - lots of protein in hot oil. If you think that it’s another way to say deep-fry you’re not far off. So if you have a deep-fryer, by all means use that. Otherwise I recommend an electric burner, especially an induction burner, with a stable cast iron or steel pot. All you need to do is heat some oil to about 320ºF to 350ºF then the cooking can begin. Cubes of beef, chicken, boiled potatoes, blanched veggies like cauliflower, broccoli or asparagus and even firm tofu (lightly salted) are all great candidates for the pot. It’s the dipping sauces you provide that will make the experience a standout. Try a béarnaise with striploin, a teriyaki with chicken…. you’re only limited by your imagination. Check out the Stock Market for a world of sauce possibilities. An extension of this idea is what I call the Tempura Party; in which case the oil should be a bit hotter, at about 365ºF, and you need a tempura batter - South China Seas sells a mix to which you can just add water. (The trick to crisp tempura is to keep the batter cold and loose by adding ice cubes and some corn starch or flour or batter mix from time to time.)

Long bamboo chopsticks instead of fondue forks work well here and don’t forget to skim the oil with a sieve or slotted spoon periodically to get rid of the bits of loose batter. As to ingredients, prawns of course, fish, scallops, blanched oysters, chicken tenders, yam, squash and mushrooms are among my family’s favourites. To make a basic dipping sauce, combine 4-part dashi, 1-part each of mirin and Japanese soy sauce, add sugar to taste and bring to a boil.

Then there is the Chinese hot pot (or huoguo, literally fire-pot), which is centered around a boiling hot broth. To keep it simple, I like to use a chicken broth and toss in a couple of slices of ginger and re-hydrated Chinese mushrooms. All sorts of raw ingredients can go into the fondue a la Chinoise as long as they are cut into bite size pieces and can cook quickly. Thin slices of beef, pork, lamb or fish are common, as are leafy vegetables such as spinach, Napa cabbage, lettuce or chrysanthemum greens. Meatballs, dumplings and noodles are also popular. Just set out platters of them and get started. On the side, provide separate bowls of soya sauce, chili sauce, sesame oil, sesame paste and satay sauce and allow dinners to mix their own dipping sauce to taste. And don’t forget to finish with the delicious soup afterwards.

For dessert? Chocolate fondue anyone?

Have fun. Have a happy holiday. No double dipping!