While shopping in the Market, I’ve come across various Asian ingredients like kalamansi, kaffir lime, and shiso leaves. Can you tell me more about them? 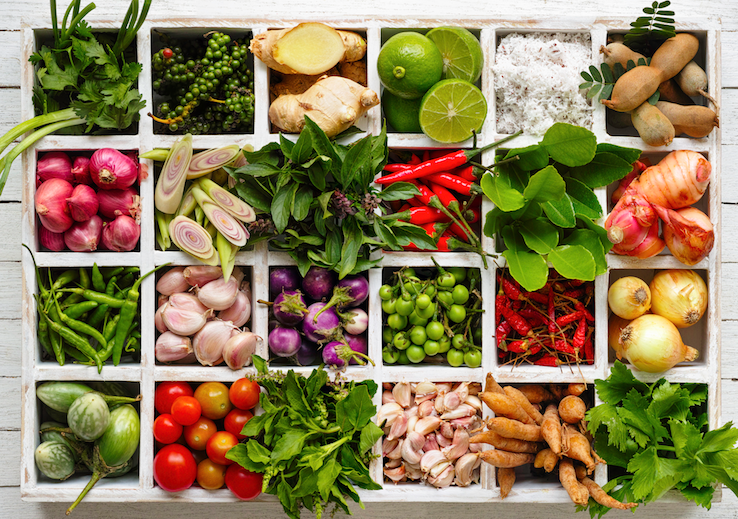 With Chinese New Year and Thet [Vietnamese New Year] fast approaching, it’s a great time to explore some Asian ingredients you may have come across from time to time in the Public Market and wondered, “Mmmm, what do I do with that?”

From the somewhat exotic to the commonplace, I’ll start with a half a dozen as an invitation for you to write in with your queries, and perhaps get on to more in another issue.

Kalamansi - This round, thumb-sized, bright green citrus is highly aromatic and has a punchy tart flavour that's reminiscent of a combination of a lime and a tangerine. Sometimes called musk lime, it is indigenous to the Philippines and plays a big role in the country’s cuisine. It is used in many dipping sauces and served alongside noodles and rice dishes and grilled meat and fishes, ready to add a blast of flavour with a simple squeeze. The juice, when sweetened, makes a wonderfully refreshing drink. Some folks like to cut and sprinkle kalamansi into a bath as a relaxing fragrant tonic. And it's believed that squeezing a cut kalamansi into the nostril will alleviate nausea. I like to make a simple dressing by combining the zest and juice of a few kalamansi with honey to taste. Then I whisk in about equal amount of olive oil and season with sea salt and freshly ground black pepper. It’s delicious tossed with cubed avocados and tomatoes and served over mixed herbs and greens.

Kaffir Lime – Nothing says Thai quite like the unique fragrance of this small, knobbly, rough-skinned citrus. Both the rind of the fruit and the equally perfumed leaves, sliced into thin threads or lightly bruised and left whole, are added to curries as a defining aromatic touch. The leaves, if you’ve bought more than you can use in a recipe, freeze really well for future use. Or if you like, drop a couple of leaves into a gin and tonic, a mojito, or a pitcher of lemonade for an exotic twist.

Lemongrass - This cream-colored, fibrous grass with a lemony, citronelle-like perfume and flavor is used widely in the cooking of Cambodia, Indonesia, Vietnamese, and Thailand. Each of these countries has a version of a hot and sour soup infused with this herb and marinades and curries seasoned with it. Typically the more tender, bulbous part of the plant - about 4 to 6 inches from its base – is used. In soups it’s either thinly sliced so it can be eaten or left in segments so it can be discarded after cooking. In case of marinades and curries, lemongrass is often pulverized with a mortar and pesto in combination with other ingredients to make a paste. But don’t throw away the tough tops of the lemongrass. Use them to skewer grilled meats or fish to add some zest, or toss them into a fish or chicken stock. Lemongrass also freezes very well, so feel free to buy a bundle and stow some away.

Tamarind - Known as asam in Indonesia, ma kham in Thailand, sampalok in the Philippines, and me in Vietnam, tamarind is widely grown and favoured as a sour element in the cooking in tropical Asia. While you may not know it in its raw form, if you’ve ever reached into your pantry of "secret ingredients" for a bottle of Worcestershire sauce to add a little zip to your special sauce or salad dressing, you are using tamarind in your cooking. In the Market (at South Chinas Seas, for example) you may come across these "dates of India" in its leguminous form – as brown, fuzzy, brittle pods that resemble fava beans. The sour, reddish brown pulp inside has a floral, prune-like depth of flavor that enhances the complex chutneys and pickles of India, the aforementioned hot and sour soups from the region, the popular Pad Thai noodles of Thailand (when made properly), to cite but a few. Rich in tartaric acid and vitamins, tamarind is favored as a tonic reported to be particularly beneficial to the liver and kidneys and widely used as a base for cooling fruit drinks. Due to its high pectin content, tamarind is also popular in the making of jams and jellies. Partially dried tamarind pulp, sold in blocks, is probably the easiest to get and to use. Just cut or break off a piece from the block and soak it in hot water for about fifteen minutes (for a one-inch cube of dried tamarind, use about half a cup of water). After steeping, work the softened pulp with your fingers to separate the pulp from the fibres, then strain the mixture through a fine sieve while working it more to extract all the pulp. The resultant puree-like liquid is what is generally called for in recipes. If you’re using fresh pods, use about five to half a cup of water and proceed as described above. (Try the recipe: Squid Salad with Tamarind Dressing)

Rice Paper – Called Banh Trang in Vietnamese, these brittle, translucent sheets that look like they’re made of plastic are actually made from mashed cooked rice dough rolled into paper-thin sheets and cut to shape, then dried on bamboo mats, which accounts for the woven bamboo imprint on them. The large rounds are used in salad rolls while triangular ones are better for making spring rolls. To prepare the former, you can either brush the sheets with warm water on both sides and let it moisten on a clean cutting board for a couple of minutes before using. Or, if you’re impatient like me, dip them in hot water (just under boiling) for a few seconds until softened. To make spring rolls, brush with beaten egg on both sides, then fill with filling (try marinated ground pork, shrimp, cellophane noodles, bean spouts, and shredded carrots).

Tofu – Everybody knows tofu - those white, usually bland, blocks of coagulated soy curd that comes in choice of soft, medium, and firm textures - right? Ah, but there is much more. Have you tried silken or egg tofu that comes in a round tube? They are slightly firmer than soft tofu and are terrific pan-fried until golden, or evenly coated with cornstarch then deep-fried to crusty-outside-creamy-inside perfection then gently folded into a vegetable stir-fry or a mushroom ragout. How about pressed tofu, seasoned or plain, with the texture of butter cheese, ready to be sliced and tossed into stir-fries? Then there are tofu puffs that come already deep-fried. Try hollowing them out, crisping them in the oven, then stuffing them with crabmeat for a party canape. Tofu “skins” – dried sheets of soy milk - are also fun to work with. In stick form, they are meant for soups and stews and are ready to use when softened by soaking in water. They also come in frozen sheets which are a fabulous gluten-free substitute for spring roll wrappers. They are really crisp when fried and are also used to make a remarkable variety of mock-meat dishes in Chinese vegetarian restaurants. And of course there’s dessert tofu – light with the texture of soft panna cotta – it’s a perfect backdrop to stewed fruits, or a ginger-scented syrup, or, in a pinch, even fruit cocktail out of a can.