There’s a very special permanent outdoor art installation on Granville Island, with commissioned murals created by artists from around the world - and it’s located in a parking lot.

The former Chain and Forge building is one of the two covered parkades on Granville Island, but looks can be deceiving! When we refurbished the building, once home to the manufacturing of huge metal chain, we wanted it to be a multi use space, not just a parkade. It’s designed with individual bays with power, lights, custom curtain walls, and is routinely blocked off to cars to host large outdoor events such as Art Smash, All Aboard Skateboard Festival, the Farmer’s Market, and two large upcoming food and beverage events, the Granville Island Brewery’s 38th Birthday Beer Fest and the Vancouver International Wine Festival’s California Beach Party take advantage of the large covered space, and adjacent outdoor space, and when it’s empty of cars the 14 murals are on full display.

Debra is a self-taught Musqueam designer who was born and raised on the Musqueam Indian Reserve. Debra is an acclaimed weaver who has been weaving for twenty years and is deeply involved with the revival of Musqueam weaving.  She integrates her peoples' history into her art and design work which can be seen in various museums and institutions, such as the Vancouver Airport. It is Debra's hope to educate others about the beauty and integrity of her people's history through her art.

Debra's weavings are currently featured at the Museum of Anthropology (MOA) in the exhibit: Fabric of Our Land. She is heavily involved in the coordination of the delivery of programing and live-weaving workshops at MOA. She also continues to work on pieces close to her heart at her home in Musqueam. It is Debra’s hope to educate others about the beauty and integrity of her people’s history through her art.

Raise Your Words, Not Your Voice

Sandeep Johal is a Canadian visual artist whose colourful geometric forms and intricate black and white line work is aesthetically and conceptually inspired by her South Asian heritage.

Sandeep believes in the power of art to create awareness around issues related to cultural identity, gender equality, and human rights. Her art practice is an expression of her social and cultural concerns, particularly gender justice. Her most recent series, Rest In Power (2017), is a body of work dedicated to twelve women from various cultural backgrounds whose murders have impacted her deeply.

Her mural is based off of one of her black and white drawings entitled Raise Your Words, Not Your Voice (2017). The title and image serve as a reminder to women that our voice, collectively and individually, is important and that we have a right to use it, but to be impeccable with our word in doing so.

"My paintings have always had a sensibility towards the natural order of things. I’m interested in creating events that both acknowledge and deny spatial illusion simultaneously. I feel as though there never is an end to these works in their self - fulfillment, which is exciting and challenging to me. My process in the beginning is to make a painting in response to one of its predecessors. None of the works are planned and continually change course until they come to some resolve where I can let them go. The forms are invented during the process, some of which survive until the end, others lost in the many layers of thin glazes of paint.

The paintings have a pictorial emphasis for the most part… They tend to be mind paintings but also allude to landscape, still life and portraiture. Having explored many of these genres in the past, they still surface in my abstractions to some degree. The objects within the paintings tend to be unique shying away from pattern or repetition. Many, especially in this recent body of work, meld organic and geometric elements. I have found that this development takes the work in two directions. On one level to point towards the idea but not define the works as autonomous art objects. On another, to perhaps talk about this type of interaction of forms, their tension and broader meaning."

Victoria Sieczka is an artist living in Vancouver, BC. She is a first generation Canadian born from parents who immigrated from Poland and Ukraine. She graduated from Emily Carr in 2014 and has since focused on the finding the perfect medium between art and design. In her piece she focuses on the shape, colors and semiotics. Semiotics is the study of symbols and how they are interpreted. The mural focuses on the possibility of taking symbols from life, language and culture and recontextualizing them to give them a whole new meaning.

Kari Kristensen is a contemporary Canadian printmaker living in Vancouver, BC. Kari’s current body of work, the Imagined Landscapes series, is composed of intricately cut linoleum prints that are referential to the Canadian landscape.  This particular piece was designed specifically for Granville Island and represents the view of the Lions/2 Sisters from her home in False Creek.  The mural is intended to be a large ­scale painting which embodies the elements of her printmaking techniques.

“firmament” is my artistic depiction of what I think heaven looks like or even what I want heaven to look like filled with the shapes, stories and visions of our ancestors… a place more vibrant and colorful than the earth we live on .....a place above the clouds.

Born and raised in Vancouver, BC, Lauren Brevner grew up in a mixed heritage family rich with culture and inspiration. In 2009, she moved to Osaka, Japan in hopes of reconnecting with her roots. There, Lauren had the honor of apprenticing under renowned artist, Sin Nakayamal. It was through her mentor that she first began her work as an artist. Nakayamal was the inspiration that sparked her journey to self-taught fruition. The composition of her paintings explores mixed-media through the use of oil, acrylic, and resin. This unique technical style is combined with a collage of Japanese chiyogami, yuzen, and washi paper on wooden panels. Her influence originates from the stylistic elements of traditional Japanese art and culture. She aspires to reinvent the eloquent tradition of using gold and silver leaf in art. Lauren’s paintings primarily involve the interpretation of female portraiture. She plays with polychromatic layers; the figures within it existing in surreal and isometric spheres. The women embody strength and femininity through somber silence. Their gaze a myriad narrative. Lauren Brevner seeks to create a commentary on the subject of women and their depiction in art throughout the ages. Her portrayal of women serves to empower rather than objectify: a reflection of the vitality of sensuality over sexuality.

James (Nexw’Kalus-Xwalacktun) Harry was born October 31, 1989 in Vancouver, British Columbia.  He is of Squamish Nation (Swxwú7meshḵ) and European decent (Scottish, and German). James spent much of his childhood and early adolescence immersed in art. He learned First Nations stories, form and design, and carving skills from his father, Xwalacktun (Rick Harry), a master carver of the Squamish Nation.   Similarly, Jennifer Kleinsteuber, James’s mother and an accomplished painter, gave him hands-on experience with drawing and painting. He developed his own techniques and methodology, expanding on his father's work and beginning to formulate a contemporary approach to Aboriginal art and practice. When he was in secondary school, James began his career as an artist by carving the doors of the BC Aboriginal Sports Hall of Fame.  He attended Emily Carr University of Arts and Design, obtaining a Bachelor of Fine Arts Degree with a major in Visual Arts in 2014. His studies focused on integrating traditional Coast Salish art forms with contemporary concepts and materials. In 2011 he won the YVR art scholarship which allowed him to display his work in the Vancouver International airport. In 2015, he was commissioned to create a permanent installation at UBC. During the same year, James designed the International Masters Game medals produced in Gold, Silver, and Bronze.  Harry has had artwork displayed in Ottawa’s parliament building, the United Kingdom, and Munich Germany.James has dedicated a lot of his time to his local community in the Lower Mainland working with over 7 school districts and 6 different city municipalities. His art practice includes sculpture, design, installations, and painting.

Born and raised in Madrid, adopted by Barcelona in the early 2000’s with short periods in NYC and currently back in Spain after 3 years in Dubai (stay that started with a one-year art residency with Tashkeel), Sánchez is a self-taught artist with a strong, graphic style that resonates through all of his projects: paintings, murals, sculptures or installations. Coming from the cultural worlds of graffiti and skateboarding, Sánchez started learning by himself graphic design and illustration. This took him to the art direction of different skateboard companies and design studios but broke up with the computer in the mid 2000’s and went back to the analog work, where he changed the screen for wood, saws, brushes, murals, spray cans, found objects or canvases, but this rupture with the computer wasn’t definitive since he still works on digital art for selected projects. If you dissect his work you will find that graffiti and graphic design from his old days, skateboard graphics, cubism, connectivity, tribal art and Mediterranean lifestyle among many other things. All this mixture, including his continuous explorations with volume in the past years will take us to a natural evolution that is making of Sánchez’ work what it is nowadays.

Jeremy Wong, is a graffiti artist with 20+ years experience. He takes much of his inspiration from contemporary urban culture and street art. His artwork has been presented in locations such as the 2010 Winter Olympics, TED Talks and the Vancouver Mural Festival.

Carrielynn is fueled by the passion to leave positive footprints on the earth. She is a descendant of Coast Salish ancestors that have been sustained by S’olh Temexw (our land) since time immemorial & Western European ancestors that settled in what is now Canada. Carrielynn was born and raised in S’olh Temexw and nurtured by many parents, grandparents, aunts and uncles. Along with owning and operating a thriving art practice, Carrielynn maintains a communal role as a plant practitioner, the philosophy and responsibilities for traditional plant practitioners range from protection and preservation of lands, to networking and trade, along with harvest and preparation methods, and more. The art work and advisory Carrielynn contributes to the circles and communities she is a part of reflect these understandings. It is the foundation of an intrinsic connection to the land that provides Carrielynn her understandings and perspectives for design. With ancient and modern practices combined, Carrielynn’s professional artistic practice takes the form of murals, canvas paintings, drums, paddles and in recent years, illustrations for scientific reports and children’s books.

Ola Volo (BFA, Emily Carr University) is a Canadian Mural artist and illustrator from Kazakhstan with a distinctive style drawn from folklore, multiculturalism and identity. Her intricate works bring animals, people, architecture and nature together to articulate diverse stories rich with symbolism and elaborate forms. Ola creates complex narratives that acknowledge the subtleties of human nature while celebrating the little surprises of everyday life.

Her work is internationally recognized for its inventiveness and unique stories; every character is full of spirited personality and inhabits a dynamic environment. Her practice lends itself often to the public realm, with many of her murals helping to shape and beautify spaces across the world. As well as creating commissions for a wide range of international clients including Starbucks, Louis Vuitton, Lululemon and Volkswagen, Volo also finds time to do gallery artwork. 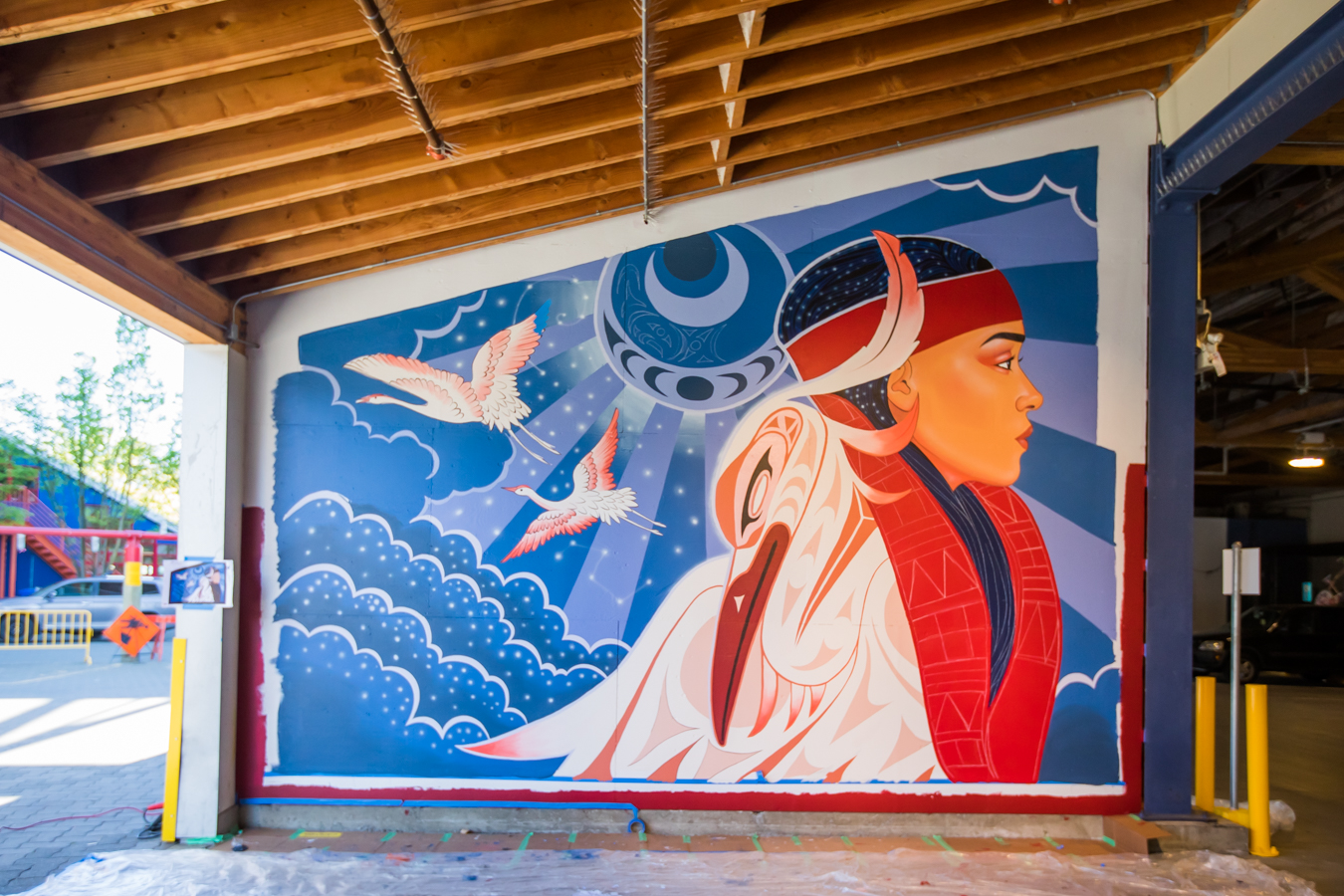 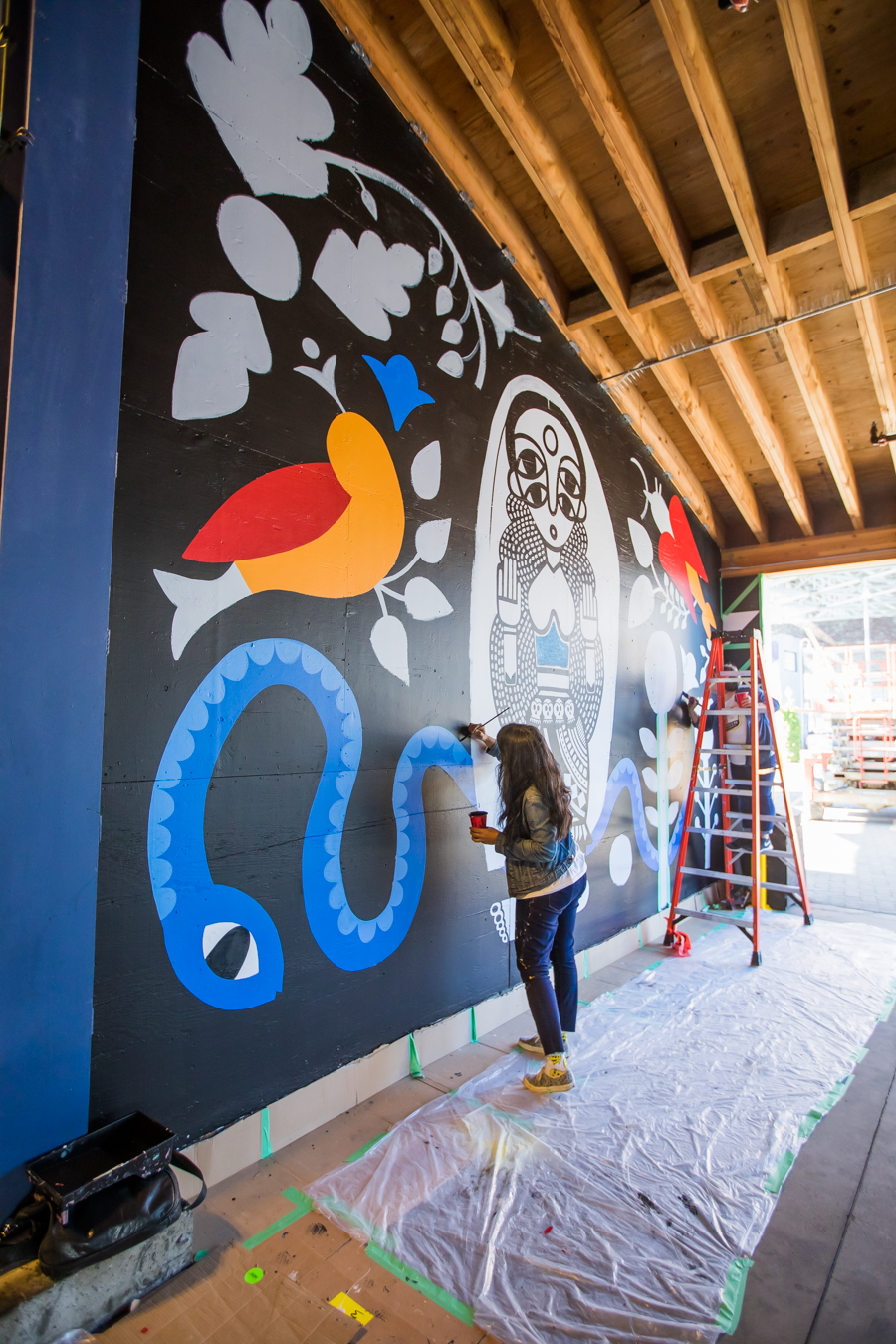 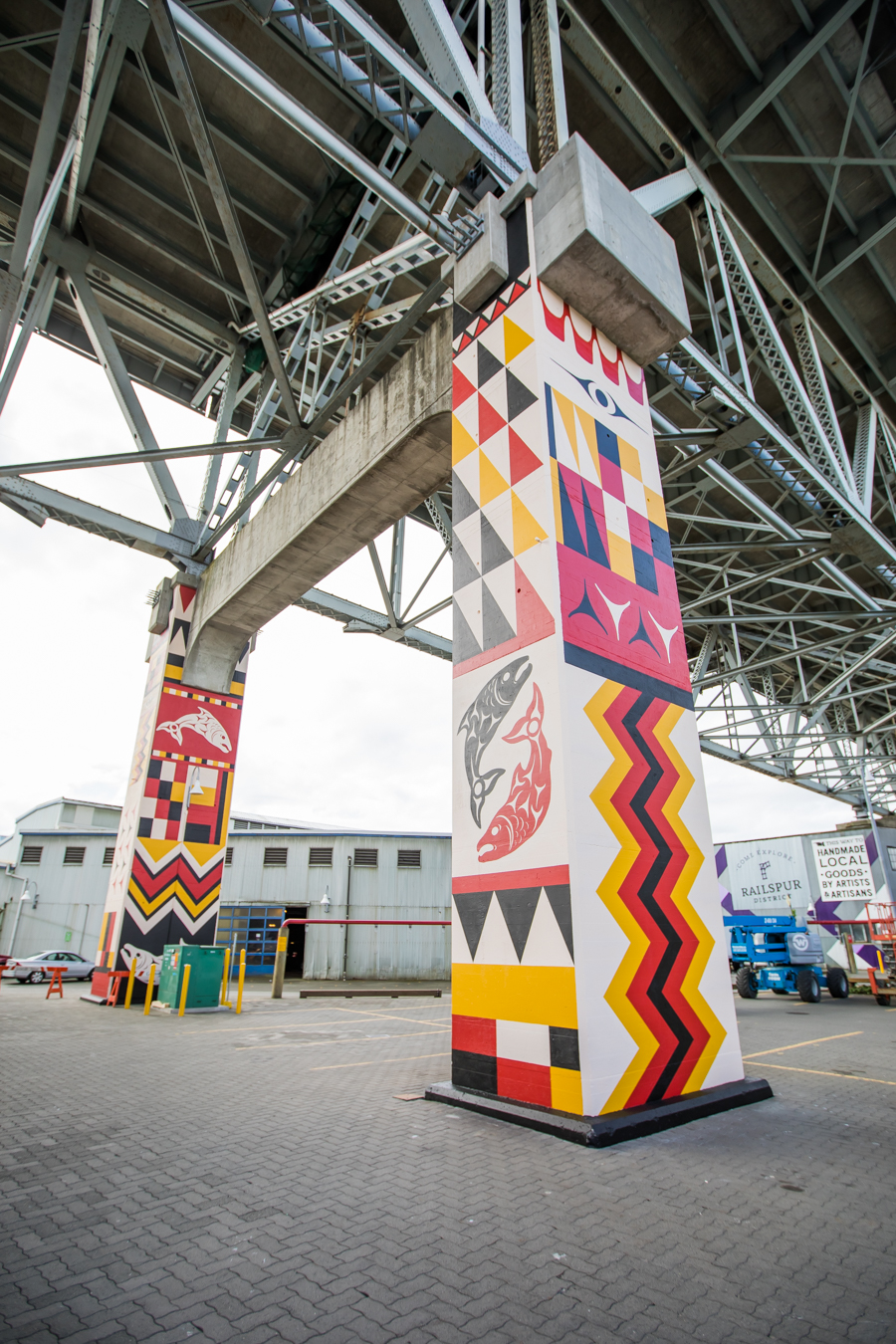 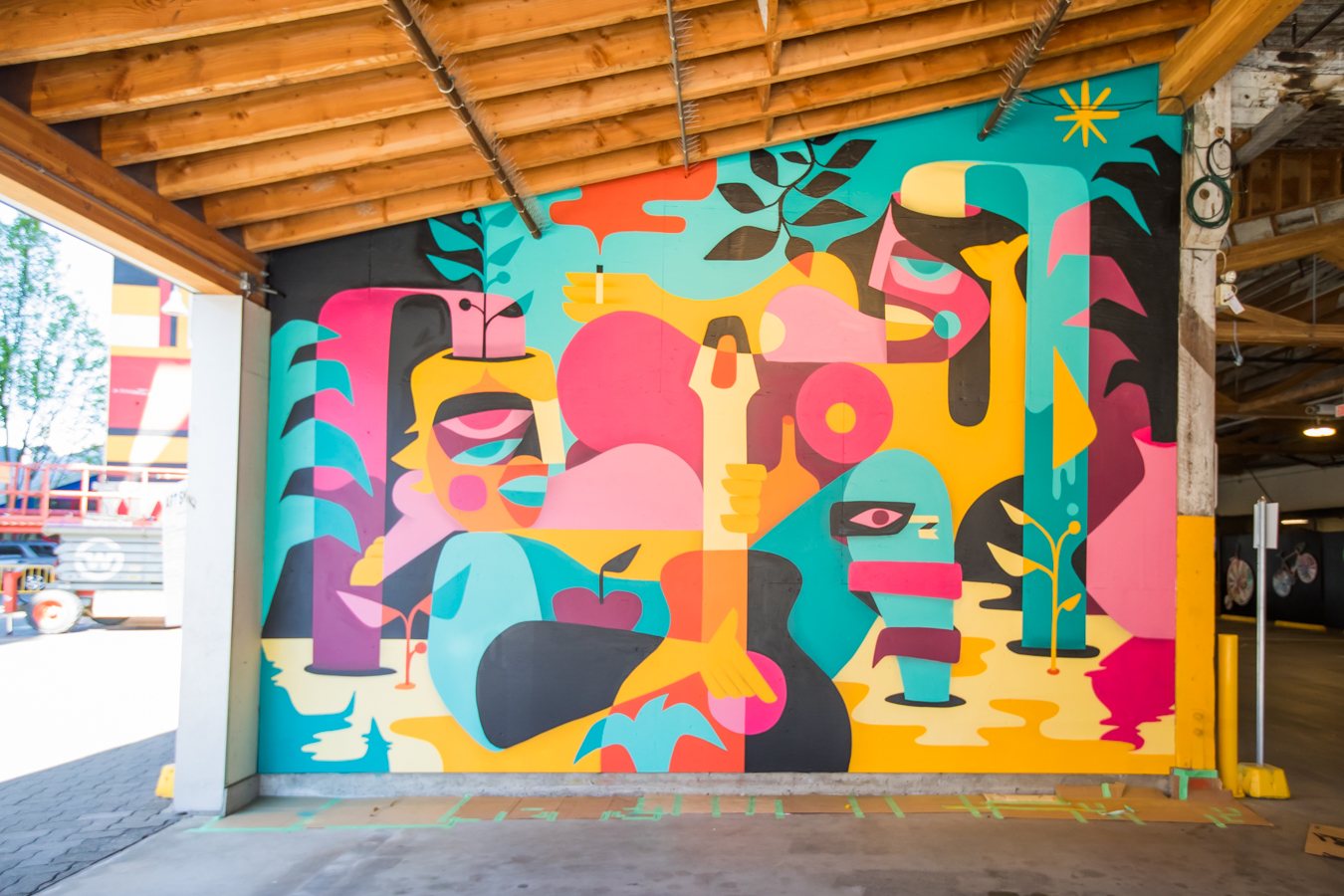 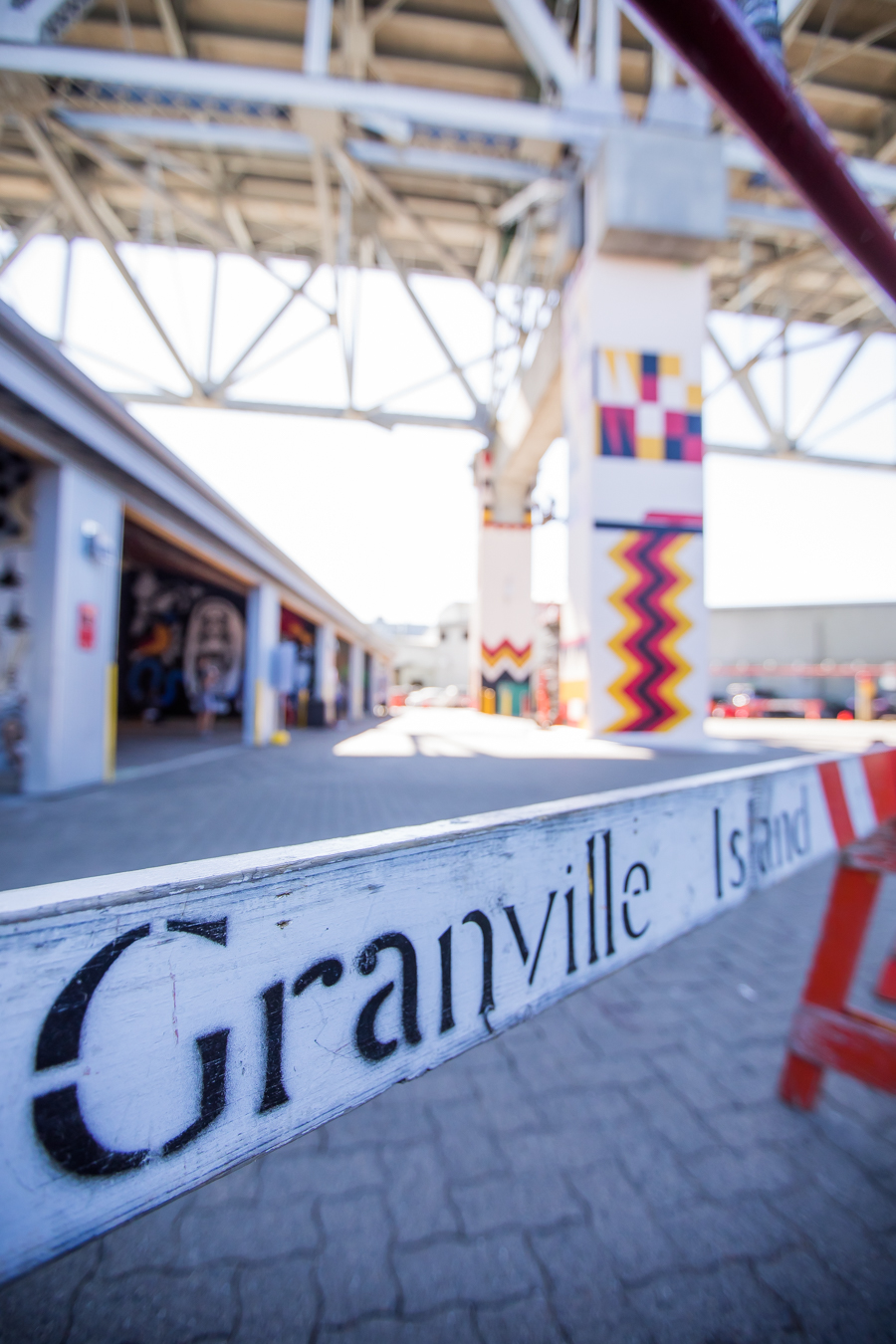