On Remembrance Day, Wednesday, November 11th, the Granville Island Public Market will observe two minutes of silence at 11:00 am pst. If you are in the Public Market, or elsewhere on the "Island" please stop to observe, give thanks and remember the sacrifies of our veterans past and present, and the men and women in service to our country.

The Story of Remembrance (Courtesy of the Royal Canadian Legion)

Across Canada, and in many other countries, people gather on November 11 to honour the courage and devotion of brave men and women who made the supreme sacrifice of dying for their country. The hostilities of the First World War ceased on November 11, 1918, at 11:00 a.m. the eleventh hour of the eleventh day of the eleventh month. The following year marked the first observance of a day to remember and honour those who died, as well as to give thanks for the sacrifices of those who came back from serving their country. Since then, Canadians have fought in other conflicts and many have given their lives so that we might enjoy freedom today. They too should be remembered.

In May 1915, one of Dr. John McCrae's closest friends and comrades was killed in the trenches near Ypres, Belgium. He was buried in a humble grave with a simple wooden cross. Wild poppies bloomed between the crosses marking the many graves. The next day, unable to help his friend or any of the others who had died, Dr. McCrae gave them a voice through this poem. On January 28, 1918, John McCrae succumbed to pneumonia and meningitis. He died not knowing the outcome of the war, but with a full understanding of the cost of it. Before he died, Dr. McCrae had the satisfaction of knowing that his poem had been a success. Soon after its publication, it became the most popular poem on the First World War. It was translated into many languages and used on billboards advertising the sale of first Victory Loan Bonds in Canada in 1917.

In part because of the poem's popularity, the poppy was adopted as the Flower of Remembrance. The symbolic poppy and John McCrae's poems are still linked, and the voices of those who have died in war continue to be heard each Remembrance Day.

In Flanders fields the poppies blow
Between the crosses, row on row,
That mark our place; and in the sky
The larks, still bravely singing, fly
Scarce heard amid the guns below.
We are the Dead. Short days ago
We lived, felt dawn, saw sunset glow,
Loved, and were loved, and now we lie
In Flanders Fields.
Take up our quarrel with the foe:
To you from failing hands we throw
The torch; be yours to hold it high.
If ye break faith with us who die
We shall not sleep, though poppies grow
In Flanders Fields. 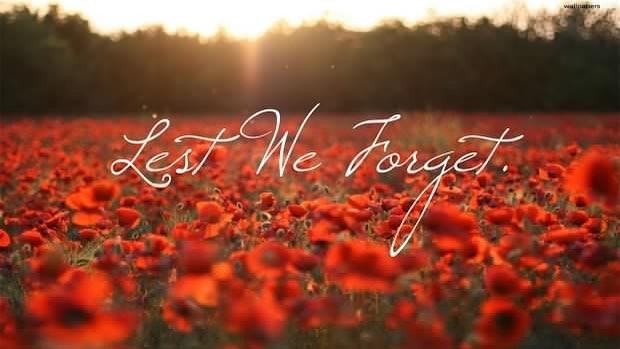