Exotic Fruits in the Market

During a recent stroll through the Market, I noticed some strange looking fruits at the produce stalls. What is it, and how do I eat it? One of them has a hard purplish brown shell.

The fruit you mentioned is called mangosteen. It’s one of a number of exotic tropical fruits that are flown in from across the Pacific from locales like Thailand, Malaysia, Vietnam, China, and Taiwan. Most of us by now are familiar with the tasty varieties of mangoes from these parts of the world which come in different shapes and hues. Here are a handful of other tasty fruits that are definitely worth a try:

Mangosteen, Garcinia mangostana L.- Available from May to late August, this delicious fruit sports a thick, purplish, woodsy rind that has the appearance of a lacquered box. Inside you'll discover delicate creamy white segments that are intense in flavour - sweet yet slightly tart. To open, make a cut around the middle of the fruit about 1/2 cm deep with a sharp knife then pry open to expose the flesh. Eat with a fork or use a small spoon to scoop out the segments for presentation. After a quick rinse, the thick, tough halves of the shell can be used as a bowl for serving small scoops of ice cream or sorbet. It makes for an interesting presentation and never fails to generate comments. Legend has it that Queen Victoria liked them, so she offered a reward to anyone who could bring her fresh ones. 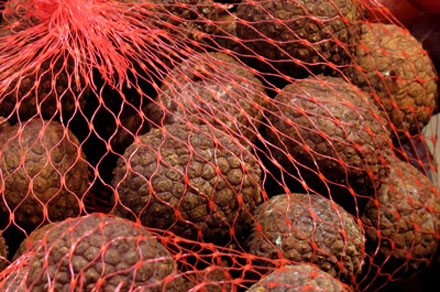 - Simply my favourite fruit of all times, it's also called lychee or lychee nut. It is my theory that it is called the latter because at one time litchis were only available here in its dried form. When dried, the normally crimson, rough leather-like shell becomes brown and hardened. Coupled with the shrinkage in the flesh which rattles in its brittle shell, it is not difficult to mistake it for a nut. Fresh litchis, though, are a perfect balance of sweetness and sourness and wonderfully juicy. When you start eating them you'll find that it's very hard to stop.

Among my favourite are the greenish ones with pointy bumps on the skin – no, they are not unripe, green with red blushes is their natural colour – which are poetically called “Concubine’s smile”. They are reputedly favoured by the concubine of a rather despotic Tang dynasty emperor. They are sweet and have very small pits. When buying litchis, look for ones that are plump and heavy with bright-coloured skin. Browning skin is an indication that they are not at their prime. Litchi from Asia are available roughly from April to July.

Litchis take to canning quite well without really drastic loss in flavour. Canned litchis are wonderful made into a granite or sorbet. For a quick granite, simply puree an entire can of litchi, syrup and all until smooth, add a squeeze of lime juice if desired. Pour puree into a shallow tray and place in the freezer. After about an hour, or when puree is half frozen, stir it up with a fork until the ice and liquid flakes into a slushy. Return it to the freezer and repeat a couple more times until the granite is frozen but scoopable. 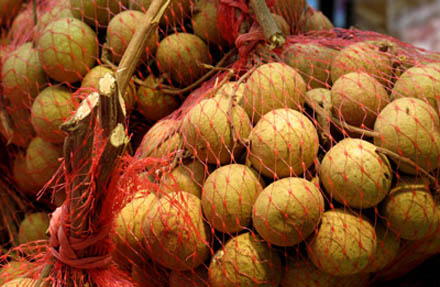 - Grown in northern Thailand and ripe from June through August, this thumb-sized fruit is sold in grape-like bunches. It has a light brown, beige shell that has a suede-like appearance. When removed it reveals a pear-like white flesh that has a flavour reminiscent of that of the lychee. It may not be quite as juicy but is certainly equally addictive. 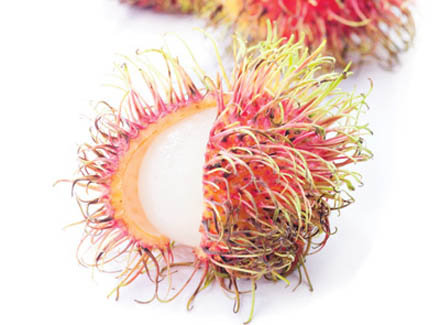 - This unique looking fruit from southern Thailand is ruby to dark red and covered with scaly green hairs. The skin is thick and shell-like, like that of the lychee, and is available from May to September. The flesh is pearly white and tastes a bit like lychee, but sweeter and has a toothsome crunchiness. It's sure to be a conversation starter at a dinner party.

Sugar Apple, Annona squamosa L. - Also called custard apple for the creamy texture of its sweet white pulpy flesh, this is also an exotic looking fruit with which to adorn your table. It is heart-shaped and about the size of a child's fist. It has a lumpy, rough green skin and tastes a bit like guava. To eat, simply break or cut it open and eat with a spoon. In Asia it is a very popular base for ice cream.

Rose Apple, Eugenia javanica Lamk. - Yet another fruit from Asia that is striking in appearance. It comes in varieties of pale green or pink rosy colours and sports a waxy sheen that makes it appear like it's made out of jade. It's peak season is from June to September. In taste it is like a cross between a tart apple and a pear and has the texture of a pear.

And if you have any questions about them, ask our Market experts at your favourite produce vendor. Happy exploring.

Check out this video tip from Jason at Granville Island Produce.

There are some wonderful fruits and berries in the Market during the summer months such as cherries, raspberries, peaches, and apricots....

Chocolate that tastes as good as it looks! At ChocolaTas we are known as the chocolate lovers “must have” chocolate....